The Last Vine of the Yemenite Quarter Tel Aviv 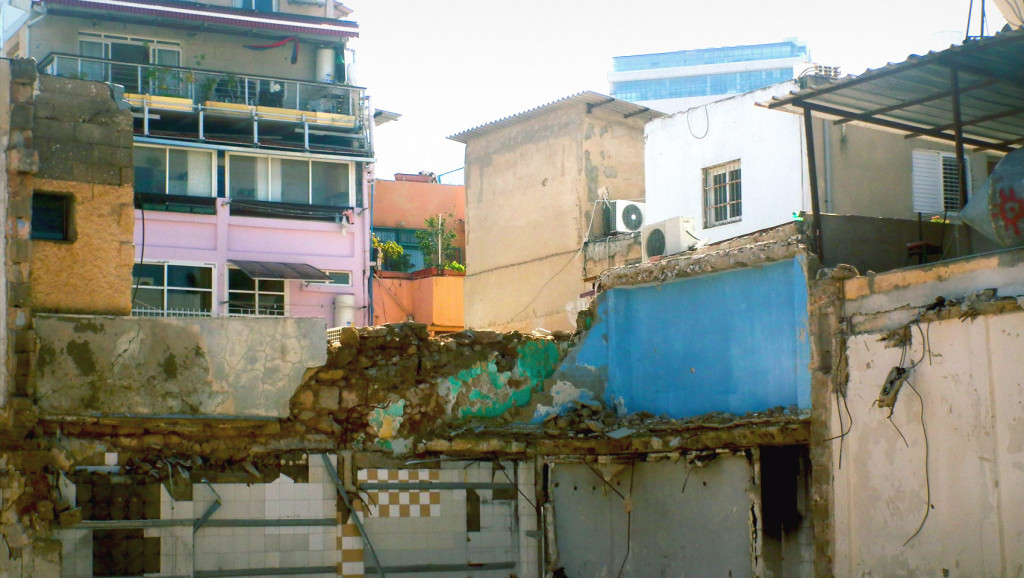 Walking today in the narrow allies of the Yemenite Quarter revealed a tale of past and present, inclusion and exclusion and more than all, constant change. Also those who were born in the neighbourhood, now loaded with chic cafes, shops and shiny buildings are surprised to see their neighbourhood transform under their own eyes. Gentrification brings with it natural contrasts such as embracing cultures and ethnic groups that were excluded for dozens of years from Tel-Aviv’s center. Now the Yemenite Quarter is part of the Tel-Aviv, definitely known as where you should be, tours and taste. So absurd and natural at once.

As I strolled last week between the colourful walled houses waiting for the only grape vine of the quarter to appear around the corner I suddenly stopped. The simple urban corner I had never even bothered to photograph completely changed. Why was one little grape vine, climbing lazily towards the first floored balcony, a spot I carried so many mixed feeling for?
The explanation involves a semantic translation. The Yemenite Quarter is called in Hebrew “Kerem HaTeymanim”. Meaning the “The vineyard of the Yemenites”. Like many other urban representations for local cultures, this name puzzled me. When pondering over the gap between the name of this place and its inner reality I set in search of those vines. Not including a few shabby vines growing in corners of inner courtyards hidden from the streets, this one vine was the only visible connection to the name of the neighbourhood and reality. As one who sees and interprets the world through cross cultural eyes, this vine was a hyphen between myth and an urban reality. The vine was a hyphen that grew close to the urban seam of Tel-Aviv close to Allenby street. It explains the cultural origin of the name. Obviously it was not the local Yemenites who gave their quarter its name. Probably some mayor, urban planner or committee sitting around a European styled table marked the Yemenite Quarter on a map. Had they ever walked the cobbled streets of the quarter? Wondered around following the scents of baking Saloof or Lahooh breads? Encountering locals and hearing about their parents, grandparents who spoke Yemenite Hebrew with a different rhythm in their speech? The name, detached and external to the core of this neighbourhood conveys the cultural detachment the Yemenite Quarter experienced for so many years. Now the only link to the cultural logic that lead to the European profiled men to name the neighbourhood after a myth had vanished.

The vine is gone. It is buried under sand and rubble. A sign erected near the sands presents the four floored building that will be built. Because myths are stronger than reality, this neighbourhood will bear its name also when no vines exist any longer.
But you, who come from near of far, don’t lose your human curiosity. Go touch the old walls, greet the elders and ask for some Lahooh in the bakery.